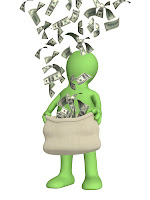 Several changes in October. HCP cut dividend after it spun off QCP. More on that later. Also, I put $2500 in a LendingClub account to experiment with a new mostly passive income stream. No other transactions for me.

In November ARLP will pay out dividends. While their business (and stock) is certainly on an upswing I've decided to get out of this position. I have a lot of overhead during tax season because the structure of the partnership requires a lot of extra forms that my tax preparer charges me for. I think ARLP may hang in there for a while, but I'm going to put my money elsewhere. With the proceeds of ARLP and the accumulated cash since my last buy (Target, in June), I plan to open a new position. I've shortlisted O, which has a monthly income. I'm a bit nervous about this the REIT market, but they seems to be in a good position.

Also in November is the first feedback on my LendingClub experiment as the first bills are due.